If you are approaching (or have already reached) retirement age, and you’re not ready to disconnect from the workforce, you are not alone — thousands of professionals 55 and older are embarking on second-act careers. The phrase “encore career,” made popular by Marc Freeman in his book Encore: Finding Work That Matters in the Second Half of Life, refers to a new stage of work between the middle years and true old age. In fact, more than 80 percent of Americans over age 50 say work will continue to be part of their life throughout what used to be retirement years, according to a 2013 survey by The Associated Press-NORC Center for Public Affairs Research.

People are healthier and have a longer life expectancy than previous generations, and they are better educated — all of which increases their likelihood of staying in the labor force. Two primary reasons have been identified for why people are working later in life: financial stability and a sense of well-being.

Changes in Social Security benefits and the steady demise of defined pension plans have created financial incentives to keep working. If you were born between 1943 and 1954, your full retirement age is 66, and it gradually increases to age 67 for people born between 1955 and 1960. Because people are living longer (the typical 65-year-old today will live to age 85, with more than one in three people living to age 90), it is financially prudent to delay receiving your retirement benefits until age 70, at which time your monthly benefit amount would have increased by 20 percent or more.

Bridging the health insurance gap between early retirement and eligibility for Medicare at 65, the added cost of Medicare Part B, supplemental insurance, and a prescription drug plan, as well as worry about future healthcare costs (the average 65-year-old couple retiring this year are likely to spend $245,000 on medical care not covered by Medicare) all create a greater need for additional income. And, to further compound the need to keep working, there is an upward trend in Baby Boomers supporting their “adult” children into their late 20s or 30s, as well as becoming primary caretakers of grandchildren or aging parents.

However, there are reasons to go to work that go beyond financial necessity. For Traditionalists (those born in 1945 and before) and Baby Boomers (born 1946 to 1964), work has helped define them for decades. A 2012 report from the Sloan Center on Aging & Work cites the importance of still feeling connected and having a sense of purpose to remain healthy, both physically and mentally. In fact, when AARP examined why older workers stay in the labor force, approximately 70 percent said they do so, in part, because they enjoy working.

Many people are repurposing their corporate skills to support nonprofit groups. Others are taking on part-time jobs to pursue new or longtime interests. And still others are pursuing a passion — while simultaneously filling a market niche — by starting a small business.

Is Age a Concern?

Let’s address the elephant in the room: age discrimination is real. Two out of three workers between the ages of 45 and 74 say they have seen — or experienced — age discrimination at work, and surprisingly, jobseekers over age 35 cite age as a top obstacle to getting hired.

No doubt there are employers who can’t look past a candidate’s age. However, there are many traits associated with “old” that are within your control. These include:

How you present yourself on paper, during the interview, and on the job, can help sway a prospective employer’s perceptions about your age.

And the tides seem to be shifting. Adults aged 65 and older are a rapidly expanding segment of the U.S. population, and they are projected to make up approximately 22 percent of the workforce by 2022. While the number of workers under age 50 will decrease 3 percent by 2022, the number of workers age 50+ will increase 62 percent, providing employers with an experienced, engaged, motivated, and emotionally stable demographic from which to hire. 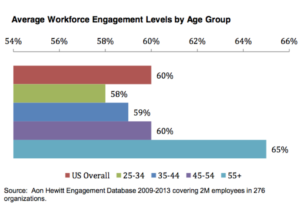 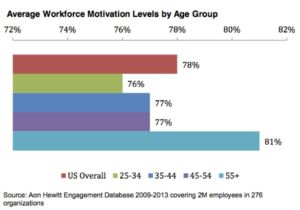 So, instead of hanging your head — certain that your age will be a barrier to attaining an encore career — market your age as a plus. Get up to speed on the latest technology. Fight ageism by being physically fit, energetic, and positive in attitude. And don’t be a know-it-all with a chip on your shoulder. Stay at the top of your game through effective brand management.

Next time we will look at discovering ideal careers, going back to school, and your resume.

Read more on our blog

The alarm rang at 6:00 am on Monday morning, and Tom Martin hit the snooze button. The knot in his stomach tightened as he envisioned heading to the office for … END_OF_DOCUMENT_TOKEN_TO_BE_REPLACED